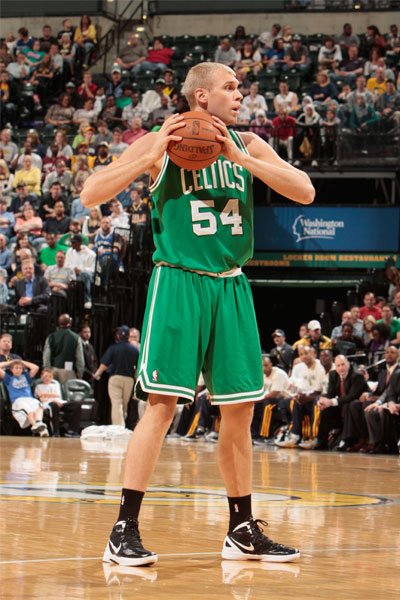 Greg Stiemsma grew up in Wisconsin where his skill and commanding 6’11’’ stature made him a natural on the basketball court.  But his talent could not mask the depression that initially appeared while he was in high school.  “The first time I dealt with depression was during basketball season my senior year,” the 27-year-old remembers.  “At that time, I didn’t seek the help that I should have.  I didn’t admit or face my feelings.”  He graduated and began attending the University of Wisconsin-Madison where he played for the Badgers. (Photo credit: Brian Babineau).

Greg did well during his freshman year, but problems resurfaced when he was a sophomore.  His life was slowly being overwhelmed by another debilitating bout of depression.  “The end of the semester came and I wasn’t taking care of my schoolwork,” he says.  “I was living in a false reality thinking that things would take care of themselves.”  Greg was ruled academically ineligible to play in January 2006 and had to sit out the entire second semester of his sophomore season.  Depression eventually took a toll on everything in his life.  “It was like I was living as a zombie or a robot,” Greg says.  “I didn’t want to get out of bed.  I didn’t really want to do anything besides the stuff that I absolutely had to do.”

Greg’s mother, who had personal experience with depression, was the first to suggest that he seek help.  Greg finally confided in his trainer.  “He saved my life,” Greg says.  “He was really influential in getting me to go see a doctor.  I’m still grateful to him today.”

Once Greg began receiving treatment and opening up to loved ones about his depression, his condition improved significantly.  “My friends and family were great,” Greg remembers.  “They just wanted to see me get better.  They wanted to see me be me—the guy they knew rather than the guy I had become.”

One of the tools Greg learned for managing his wellness was to set small, short-term goals.  Sometimes they were as simple as getting out of the bed and having breakfast.  Achieving those goals helped him build positive momentum.  “By the end of the day,” Greg says,  “I was not just sitting around saying, ‘I didn’t do anything today,’ or feeling sorry for myself.  Making and achieving little goals kept me going.”

Greg left the Boston Celtics in August 2012 to play center for the Minnesota Timberwolves.  Although the attention aimed at professional basketball players can be intense, Greg makes a conscious effort to stay even-keeled and above the hype.  “There is a lot of stress and pressure, at times, with this profession,” he admits.  “You have to stay off the roller coaster.  You can’t get too up on the highs or down on the lows.”

Greg has decided to use his celebrity status to make others aware of depressive disorders. “So many people are affected by them and it shouldn’t be a closeted issue,” he says.  Greg’s involvement with Families for Depression Awareness has helped bring the organization’s message to a wider audience.  “If sharing my story can encourage one person to get the treatment that they need, then it’s worth it.”