Joe’s battle with depression impacted both his and his wife Becky’s lives immensely, but they held on fast to each other and came out better for it on the other side. 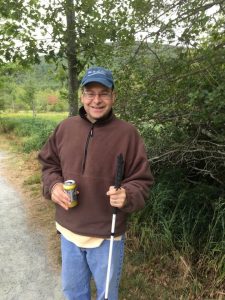 Joe has a hereditary condition that causes vision loss over time and had been legally blind since 1989. In 2011, Joe was losing the last of what remained of his functional eyesight, which brought on a storm of anxiety, fear, and depression. That trauma came to a head in November 2011 when Joe had a psychotic break and had to be hospitalized for five weeks. This event was a crushing blow to both Joe and Becky, who were unprepared for the fallout and what was to come after.

Joe was unable to work while he suffered through periods of depression, mania, and paranoia. He felt numb inside and could not be an active participant in his own marriage. Becky was challenged with how to hold on and stay in a situation where things just keep moving forward without improving.

One day, when Joe made the simple selfless gesture of changing a coffee filter, they both saw a glimmer of hope. From there, Joe slowly continued to respond to medication and therapy and resume his life activities. He now works and is much more involved in his care and mental wellbeing. He says, of all the things he has tried, “Meditation has helped the most.” 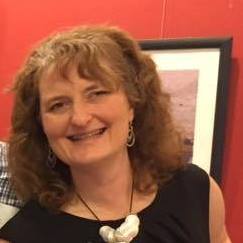 When her husband suddenly became aggressive and dangerous and had to be hospitalized in 2011, it would be an understatement to say that Becky was devastated. Everything she knew to be true about herself, him, and their marriage suddenly crumbled at her feet.

As she began to navigate the mental healthcare system, she was disheartened to find how broken and discouraging it was. They saw numerous doctors and tried various medications with unsuccessful results. They needed a team of professionals to work collaboratively and in the best interest of Joe, their patient. It took a long while to build this team.

Becky instantly became Joe’s caregiver and she referred to him as a “sick bird.” She no longer felt like his wife, but a roommate who took care of him, the household, and all financial responsibilities. She agonized over feelings of discouragement, hopelessness, and fear. She often wondered, “How long can I continue in a relationship where I do all the giving?” Their once-close relationship had dwindled. If Joe wasn’t sleeping, he was tired and depressed; he couldn’t even engage in conversation or help with cooking.

Thankfully, Becky developed a self-care plan to help her manage these difficult feelings. She benefited from moving her body in Zumba dance classes. Her network of close friends became her lifeline. They filled in where Joe could not, remembering her birthday and special occasions. Friendships like these saved her and were something she could count on as a constant in her life. For self-preservation, she built a life separate from Joe, not knowing if he would ever come back to her. 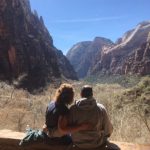 All the while she was caring for Joe and keeping the bills paid, she kept a watchful eye for any signs that things were heading back into a dangerous area. She got very good at detecting barely-perceptible changes in Joe’s personality. The day that Joe finally turned the corner, even through a small action, was a big day for them both.

From there, they have gone forward with love and respect, conscious that things could change quickly. The difference is that, this time, they are ready for anything.